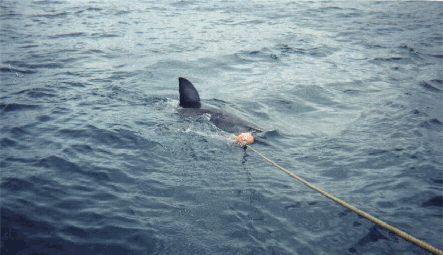 A juvenile Great White (about 3 metres) checks out the lure.
Photo: P.McKenzie

Beautiful landscapes, panoramic views, broad green fields, blue-water bays and lush and fertile valleys. Just some of the words one can use to describe this wonderful part of the world.

All this as well as some spectacular opportunities for Whale watching and diving (yep - diving is never far from my mind).

While staying in Capetown, I decided to check out something that I've wanted to do ever since I first got interested in diving; Cage diving with Great White Sharks!

Aprox two hours up the coast from Capetown, is a little town called Gansbaai (Gans Bay) which is the White Shark capital of the world. Here, the Global Shark Research Unit (Members of WHISPRA - The White Shark Preservation and Research Association) run regular cage-diving excursions into the rough and sometimes unpredictable waters of the Indian Ocean.

My trip began with a 4:30am pickup from Capetown and a 2-hour drive to Gansbaai, where we grabbed a quick bite to eat before boarding the boat and heading out through a 2-3 metre swell, to a little place called Dyer Island.

Although I was visiting in the low-season (the high season starts about mid-January and goes through to the end of September) I saw at least half a dozen good-size Great Whites, ranging in size from 3-5 metres in length. 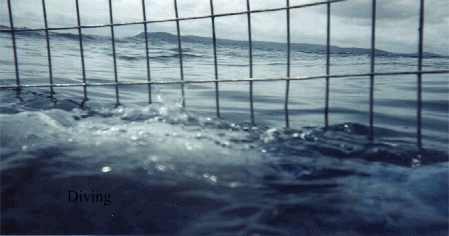 View from the cage (it's stronger than it looks...apparently)
Photo: P.McKenzie

The Great Whites are curious by nature, but also surprisingly timid in some respects.

An interesting piece of White Shark trivia; The White Sharks are more curious about COLOUR than smell. While we were on the boat, our guide Michael, threw two lures into the water to demonstrate this to us; The first lure was loaded with bait and the second contained only the brightly coloured orange-red plastic buoy that you see in the picture above. Both lures were initially positioned aprox. 15 metres from the boat. The first shark ignored the bait lure and went straight for the buoy. To prove that this wasn't chance, Michael then extended the bait lure further from the boat. A second shark again completely ignored the bait lure and homed in on the coloured buoy.

The dive in the cage was done using a snorkel, rather than a regulator, because apparently the bubble-trails frighten the sharks. Ironic that a 1-ton eating machine that consists primarily of several hundred razor-sharp teeth and attitude is scared of a little GAS!

Unfortunately, on the day I visited, visibility was only about 5-7 metres, which made spotting the sharks rather difficult from the cage ... but we managed it. 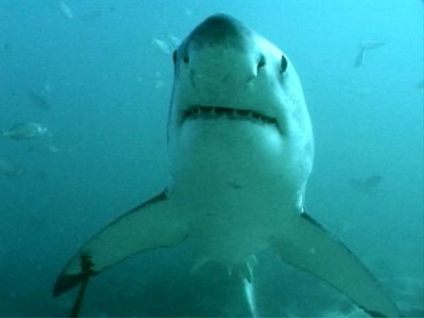 Ok - You got me! This last picture is not one of mine ok? Unfortunately the visibility was a little too low for a decent shot and the sharks were a little too timid to get this close to the cage on our trip.

The right-hand photograph here is one of many taken by Charles Maxwell, a brilliant underwater videographer. Mr. Maxwell's company Underwater Video Services is also online and well worth a visit! Some of the pictures in his gallery are amazing.

Unfortunately, movies such as "Jaws" have exaggerated the danger completely out of proportion.

In 2002, there were only 5 confirmed human deaths resulting from shark attacks around the whole world. Meanwhile we slaughtered over 10 million sharks in the same period.

The White shark is like any other wild animal; Treat it with the respect it deserves and the danger is minimal. Most attacks by White Sharks are thought to be cases of mistaken identity; the shark simply mistakes swimmers or surfers for Seals, which form a major part of it's staple diet (one of the reasons that Dyer Island is such a good place to see sharks, it that there is a thriving Seal colony there).

Despite in-depth and on-going research by organisations such as WHISPRA, we still know very little about the White Shark. They are difficult to tag, can't be followed for very long as their migratory patterns are vast and they cannot be studied in captivity (They simply don't survive). Every year, huge numbers of them get trapped and die in fishing nets and anti-shark nets installed to protect swimmers.

25 years ago, the vast majority of people viewed Whales with the same ill-informed fear, loathing and hatred. Today we understand that Whales are not the monsters of the deep, immortalised in stories such as "Orca" and "Moby Dick", but are in fact intelligent, sociable creatures who play an integral part in the great cycle of life. With luck, we may learn to view Sharks in a similar manner, before our fear and loathing overcomes us and we decimate the shark population beyond repair. Let's hope so...

All-in-all a fabulous day out and by the time I arrived back in Capetown to join the others late that evening, I was exhausted. But what a DAY!