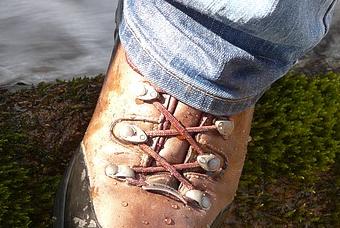 It sounds daft I know, but I never considered the idea of climbing and hiking through all terrains and weather to be particularly appealing (I spent a little bit of time in my early teenage years with the scouts, plodding through pouring rain and up to my knees in mud in some part of the Kiwi bush and I didn't remember the experience with any particular fondness).

That is until Tosh and Andy came over to my place one wet afternoon after we returned from Malta in 1995. Over a few beers, Andy talked about a number of hikes and climbs he had done over the years and shared a few of his experiences and anecdotes. He described the sense of accomplishment he felt when he stood and the top of the mountain he'd climbed or the warm fuzzy feeling he got when he returned to his base camp after a hard trek.

Within a couple of hours he had pretty much convinced both Tosh and I and we started discussing a few possibilities, oblivious to the rain that continued to pelt down right outside my window.

Andy is an experienced abseiler and had also done more than his fair share of climbing and hiking and so despite some personal self-doubts (mostly about my fitness level), I quickly found myself getting caught up in his enthusiasm. When he and Triona later suggested a trip to Wales to climb Mt. Snowdon as a good starting point, it sounded like a plan. I'd never been to Wales before anyway and I was keen to get a little bit of a look at the place.

We haven't done as much of this as we intended (or at least I haven't) but what we've done has certainly been enjoyable. It's a great way to stay fit and see a stretch of the country as well. But while I'm not ready to grow a wispy beard, wear an old woolly jumper with leather patches at the elbows and carry a membership card for the Ramblers, I'm certainly not adverse to strapping on my battered old boots and heading out when the opportunity arises.

These pages are dedicated to some of the more picturesque Climbing, Hiking and Walking events we have done.

Some of the highlights have been:-

We have of course done a number of other local hikes and climbs, but normally they've been fairly short and local (12-15 miles across the Winchester downs - that sort of thing) and although they have been enjoyable, they're probably not worth documenting here. However, the diaTribe Blog contains a couple of the prettier places we have visited including Vyne House in May 2008 and Greywell village in June 2008. Both were really easy, gentle strolls with a fair bit to see on a good day ...