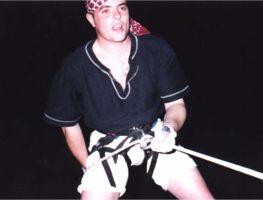 Andy first introduced us to abseiling shortly before we visited Malta in 1995. Andy had done quite a bit of abseiling previously, both during his time in the armed forces and in the years afterwards. Not only did he have the necessary experience and enthusiasm, but (almost as importantly) he had all the necessary equipment.

And so, early on one sunny Sunday while Andy, Tosh, myself and a few others were at a Sealed Knot muster, we dragged ourselves out of tents, downed a coffee (and in my case, stuck my head in a bucket of water to clear away the last of the previous night's hangover), we loaded up with ropes, clips and other necessary equipment and headed off to a nearby river bridge for our introduction to what we later referred to as: "dangling".

Once Andy had run through the basic safety procedures and set up a couple of ropes off the bridge centre, we all took our turn down the rope. It wasn't a particularly long drop (only about 40-50 feet) but it was exhilarating and we quickly gained confidence. We mastered the basics of "braking" and descending smoothly and steadily, using the central bridge pylon to descend like big unshaven spiders to the dry creek bed below, before detaching and scrambling up the bank to go again.

All in all, it was a happy bunch of Knotters that returned to the campsite a few hours later, in time for a swift pint and carbohydrate lunch (consisting of a pot noodle), before climbing back into kit and armour and heading back into the afternoon's battle. 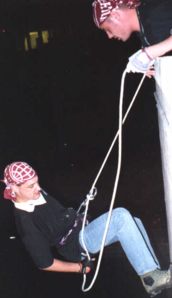 Then later that same year, Andy, Tosh, Su and I went out to Malta for 10 days holiday. I had to attend/take a martial arts event and we were also planning to do a weeks diving. But Andy packed his abseiling gear and in between times, we were determined to get a few good "jumps".

On the evening of the second day, we selected another bridge with a good 100-foot drop onto a building site. Unfortunately, it was a Saturday night and as the bridge gave access to the local Catholic church in St Julians. As the faithful were called to Saturday evening mass, they gave us puzzled looks as we took turns to drop off the side of the bridge, into the darkness below.

At the end of the week, we drove out towards the northwest coast about 15 miles from St Julians, to a village called Mellieha to a cove with an old movie set (specifically built for the 1980 movie: "Popeye"). After paying a small sum to the sleepy-looking local in the ticket office, we spent about 20 minutes wandering around the rather sun-bleached and dilapidated buildings, we spotted a couple of good abseiling spots on a cliff face, to the south of the set. We headed for the exit, passed the dozy ticket-taker and through the rusty turnstiles and within 20 minutes, we had secured ropes to a handly pylon and we ready to make our first jump...back into the Popeye village.

During the next couple of hours, we made repeated jumps down the rough clay cliff face, totally confusing Mr Sleepy as we landed, detached and strolled back out the Popeye village exit. Every time we passed, he gave us an even more confused look until he finally disappeared after about the 5th jump. We never saw him again and figured that he'd either gone to speak to the local constabulary or had (more sensibly) gone to the nearest taverna. 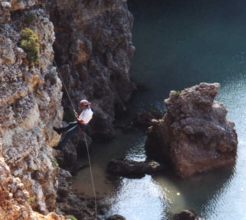 When we returned the following year with Becca, Craig, and Tri, we stayed at the rather dingy (but cheap) St George's hotel, a 20-story concrete box in St Julians. The place was a tip and any form of expectation of service was pretty quickly quashed. Worst of all, the place was over-run with grumpy Germans.

On the morning of our last day, we awoke early and after packing (and sneaking downstairs to throw all the towels hanging over sun loungers by the Germans into the pool), we found ourselves at a loss for things to do. We'd finished diving and since we didn't fly out until the early evening (and we didn't have to check out until 2pm), we took the abseiling gear up to the top of the central stairwell and tied off onto the iron railings.

We spent the next couple of hours abseiling down the stairwell (much to the annoyance of passing Germans), before packing up and heading off to the airport.

We have since abseiled at a variety of locations, ranging from the chalk cliffs overlooking Portsmouth harbour, UK (still one of our favourite sites) to the hotel stairwell of the St. George Hotel in St. Julians Bay, Malta. 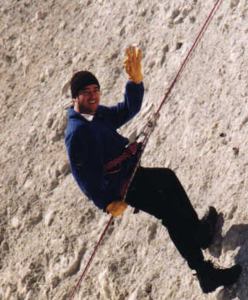 One of our favourite sites was the chalk cliffs at Portsmouth, UK (before we got busted by the MP's for getting too close to the MOD site at the top of the cliffs). They aren't particularly high (they range from between 75 and 100 feet) but are challenging and the view from the top is excellent.

More importantly, the Portsmouth cliffs were a great place to try a technique that Andy called "Penduluming"; this consisted of abseiling halfway down the cliff face, applying the brake and then turning 45 degrees and running as fast as possible against the face, before turning through 180 degrees and running in the opposite direction. On each "swing" or "run", you try and run further up the cliff face, before gravity kicks in and forces you to turn again and repeat the process.

Penduluming is a difficult technique to master and can be dangerous. It's therefore frowned upon by the more safety-conscious...but it is fun. Unfortunately, on my third run, I managed to stub my left foot hard into the cliff face, and ended up losing a big toenail a few weeks later. Fortunately, a replacement had grown up underneath.

Abseiling is a great confidence building exercise and is great fun! After the first couple of jumps, your confidence grows quickly (too quickly sometimes) and before you know it you're hooked.