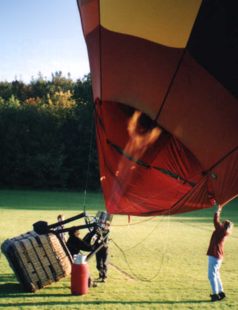 Blowing up the balloon.
Photo: P.McKenzie

In 1995, Tosh and I decided to get Su a special birthday present. Su had always wanted to ride in a hot-air balloon, and neither Tosh or I had ever taken a ride in one either.

I got in touch with a local balloon flight company called Floating Sensations, in Berkshire to get a flight organised. They were very helpful, answered all my questions and dutifully took the booking. You might want to visit their website which has all the usual information, along with a pretty spectacular selection of photos from previous flights.

Su's birthday is in October and October has notoriously unreliable weather here in the UK (even more unreliable than the rest of the year) so it was with some trepidation, that Tosh & I watched the weather reports the night before we were due to go.

Fortunately the Sunday of Su's birthday dawned bright and clear and so around 1o'clock, we headed off in good spirits, looking forward to a grand day out. Su didn't know what we were planning to do but with her usual canny aptitude, she sussed it out pretty quickly (I still don't know how she did that).

We stopped off at a nice little pub, fairly near to the ballooning take-off site for a quick bite to eat, before heading off for a trip of a lifetime. 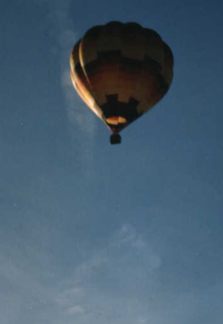 Within a few minutes, we arrived at Dean Meadow in Hamstead Norreys, near Thatcham in West Berkshire, where the Floating Sensations crew were already in the process of unloading gear and preparing to inflate the balloon. Another party was just lifting off (with cheers and whoops from their basket) as the crew continued preparing our balloon. The inflation process was surprisingly quick and within half an hour, the balloon was fairly well inflated and we were ready to board.

The trip was everything we expected it to be. Once aboard, the anchoring ropes were released and we began a gentle but steady ascent. The ground fell away below us and within a minute or two, we could see for miles.

There are many parts of Britain that are amazingly beautiful and probably a few that are more spectacular than Berkshire - but not many. West Berkshire especially is mostly rolling fields and downs, meandering rivers and small country hamlets. Definately the heart of England's "green and pleasant land".

As we drifted across the autumn countryside, our pilot pointed out items of interest and answered a handful of technical questions from the geek of the trip (yours truly) who invariably has to ask silly questions about the mechanics of the process, instead of keeping schtum and simply enjoying the splendor of the view.

The days in October are generally pretty short and before long the sun was starting to sink towards the horizon. Our pilot took us up above a thin layer of low cloud which had started to drift across the sky and almost immediately we felt warmer. As the landscape vanished below the clouds, it looked like we were bobbing along a blanket of cotton wool. 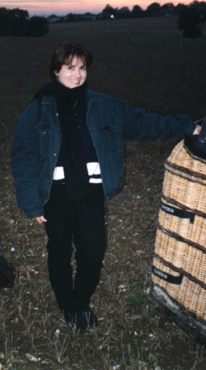 The entire flight lasted about 45 minutes (although it certainly seems faster) and apart from the occasional burst of hot air to keep us aloft and the wind blowing, there was total silence. We ascended to about 1000 feet and drifted with the air currents for miles. Below us, we could see the support crew following us in a Land Rover, along the narrow country lanes below.

Eventually it was time to land and so as dusk approached, we descended to a pretty good landing in a field near Brightwalton, just as it was starting to get dark. We braced ourselves against the sides of the basket and touched down with a only a light bump.

With big silly smiles all round, we helped anchor the balloon until the support crew swung into action and within a couple of minutes, the balloon was already deflating.

We did what we could to help deflate and pack the balloon away before giving thanks to our pilot (and picking up our souvineir certificates) and heading back to Tosh's car with the support crew.

All in all, it was a superb day out and highly recommended. If you haven't tried this...Give it a go.

Happy birthday Su.
(Thanks so much, it was fantastic!